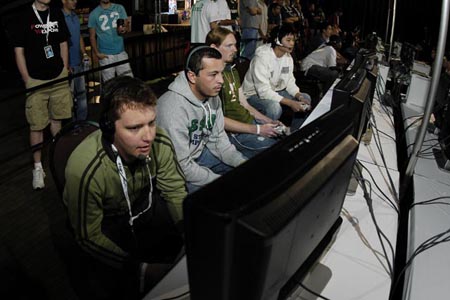 With all this talk of doping and illegal performance enhancing drugs in sports, isn’t it about time someone took a look at drug-use in professional gaming?

In an interview Game Player Australia has with Alex Walker, the director of an upcoming World Cyber Games tournament, they raise the question: “What is the WCG doing to combat the growing problem of pro gamers gaining advantage by taking uppers or hitting the bong prior to fragging?”

“Gamers can take all the drugs they like, as long as it’s not happening in the actual tournament area. Nobody has the budget to bring in any form of anti-doping agency, let alone keep it afloat or professional enough to adhere to standards that would make it reliable. The scene isn’t big enough or stable enough for any world agency to enforce it right now, let alone stop gamers from taking drugs.”

Then the interview proposed the question, “does smoking marijuana enhance the players ability to play the game?”

“I noticed that you made a mention about people claiming they were better after having a bong or two. That’s true. I’ve seen a number of players at national tournaments who came in “baked” purely so they could play better. In most cases they did, although obviously they couldn’t just pull out another joint midway through.”

Wow, pro-gamers sure know how to party! If you ask me, marijuana‘s ability to enhance gaming performance would have a varying effect depending on the person and the game they were playing. I’m better at Super Smash Bros. when I’m stoned, but I can’t shoot for shit in Counter-Strike if I’m too baked. I’m sure it could be the opposite for other players. While the effects are debatable, the jury is still out. Do you play games better when you’re stoned? Let us know in the comments.