Pepsi Introduces Bottles Made Out of Plants 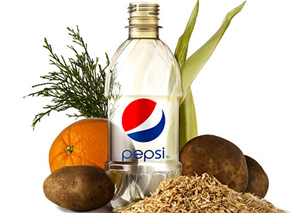 “Going green” is the “in” thing to do, regardless of how you actually feel about the environment… now that I’ve got the obligatory snarky comment out of the way, I can tell you that Pepsi is joining in on the “going green” initiative by unveiling a new bottle that is made entirely out of “plant material.”

Specifically it’s made from switch grass, corn husks and pine bark, among other things. This is part of a larger goal that will both reduce costs and reduce waste, as Pepsi hopes to incorporate other bits and pieces of food items used in the PepsiCo food business (PepsiCo owns Tropicana, Quaker Oats and Frito-Lay – JW).

There are many angles to look at this story. Some will argue that Pepsi is trying to shrink their carbon footprint, while others will argue that they are merely pandering to an audience in hopes of increasing sales. I, personally, view this from another angle: one-upping Coca-Cola. At present, Coca-Cola uses bottles that are roughly 30% PET (polyethylene terephthalate). Pepsi says their bottle will be the first 100% PET-made bottle on the market.

So, when should we expect to see these bottles? Pepsi said they’ll release a few hundred thousand in 2012 as part of a trial run. I assume this is to see how they’ll be received by the populace, and to ensure that the bottles don’t affect the taste of the beverage. Presumably, if Pepsi is pleased with the findings all their bottles will make the switch.