People Watch Video for 30% Longer on Tablets vs. Desktop Computers 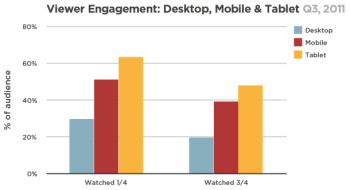 According to a recent study, people watch videos for 30% longer on tablet PCs than they do on desktop computers.

Now, this doesn’t necessarily mean that people are watching a higher number of videos on their tablets. Instead, it means that tablet owners are engaged in a video for 30% longer than people who watch videos on their PCs.

Also, people who watch a video on their tablet are twice as likely to let the video play to completion.

The study found that desktops and laptops are more likely to be used for short video clips, whereas videos that are 10 minutes or longer make up 30 percent of the hours watched on mobile devices, 42 percent on tablets, and nearly 75 percent on connected TV devices and game consoles.”