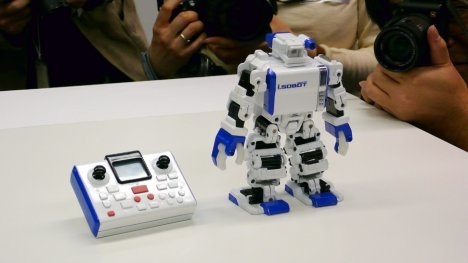 Robots are relatively unpopular objects to crave for, they’re too huge, too expensive and you wouldn’t know what-the-heck-is-going-on in the industry most of the time. Takara-TOMY’s new Omnibot2007 i-Sobot is the world’s smallest humanoid (2 legs) walking robot, and the best part is its price: $312, comparing to robots of its same class that usually cost $1000 at least. The i-Sobot measures 165x96x67mm and weighs only 350g. The robot and the remote both run on the bundled AAA rechargeable Nickel batteries, nothing fancy and very affordable. The i-Sobot can be controlled by up to 2 remotes at the same time, the voice sensor built in allows the robot to dance with music, it also has voice recognition and can respond to up to 10 vocal commands.

You can program action sequences with up to 20 moves continuously, we’re not talking about walking around, but waving good-byes and doing push-ups (see video 4). Our sources commented that the i-Sobot moved pretty well when they were being demonstrated at Toy Forum, the balance was also impressive, jump for some live videos. The i-Sobot will start selling in July, a version with a camera will be ready by October for $418. The version with camera can take and send pictures via WLAN to your computer and your phone, the head can also rotate for 60 degrees left and right. Depending on market response, Takara-TOMY hopes to bring out more and more of these affordable robots, the sales target is 50K for the first edition in Japan and 300K worldwide, the company is still deciding on when to launch it globally. We have more pictures and also a couple of videos after the jump. 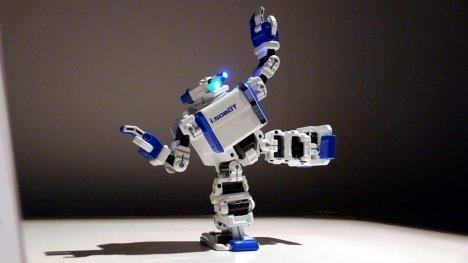