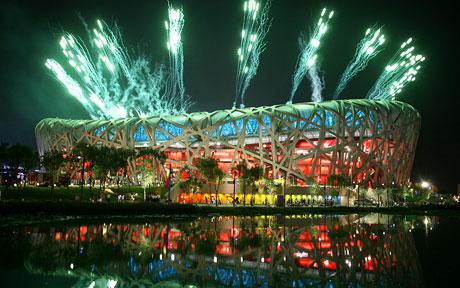 The Olympics are in full swing and even though those commie bastards from China cut our national anthem short during Phelps’ award ceremony, we still know the USA rules. Apparently, some of the people in China really do have small dicks, because according to a report from The Beijing Times, people watching the opening ceremony from home were treated to a 55-second CGI graphics sequence. Thought those fireworks were real? Not even close.

Speaking to The Beijing Times, an advisor to the Beijing Olympic Committee (BOCOG) defended the decision: “It would have been prohibitive to have tried to film it live,” he said.
“We could not put the helicopter pilot at risk by making him try to follow the firework route.”

So when you see Michael Phelps being eaten by a mutant dinosaur and Chinese gymnasts flying 100-feet above the stadium, remember to keep the computer trickery in mind.
Link