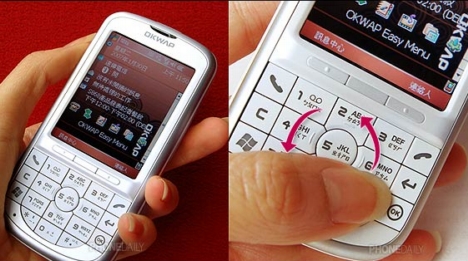 Taiwanese company OKWAP announced this morning their first smartphone S868. It is one of the rarer Windows Mobile 5.0 smartphones that give you a stylus and an alphanumeric keypad but keeping everything in petiteness (106x51x18mm 122g). The touch screen measures 2.4 inches diagonally, and the camera at the back is a 2 megapixel CMOS with autofocus. OKWAP personalized the system by adding in their own shortcut menu as well as the virtual scroll wheel over the keypad. Users can simply slide their pictures around the number 5 key to move up and down on the screen. The S868 runs on an Intel PXA270 416Mhz CPU, it has 128MB ROM and 64MB RAM, expandable with SD or MMC cards. Network supported here should be dualband though there was no word on that yet, GPRS, Bluetooth and Infrared are all in place. The S868 will starting selling in Taiwan late February for $470. — Sam Chan