Of toxic mail mascots and packet-switching 1.0 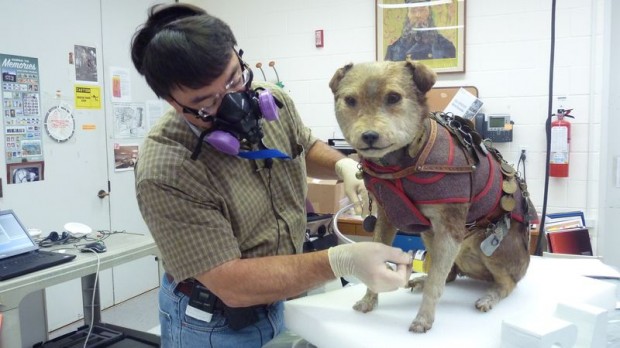 Steve Cohn of the Smithsonian Institution isn’t taking any chances as he prepares Owney, mascot of the Railway Post Office Clerks, for his bath. And his caution is warranted: Owney’s fur is impregnated with arsenic. After wandering into a post office in 1888 and falling asleep on the mailbags, Owney was adopted by clerks who managed the delivery of letters by rail; he traveled the country and eventually the world—and when he died, he was preserved in the Smithsonian’s National Postal Museum. The arsenic was applied to keep Owney’s taxidermy-preserved body free of insect pests; today, it only makes the lives of his keepers a little more complicated. Cohn is preparing Owney for conservation treatment. He’ll get a bath and a pest-proofing less poisonous to his handlers and the public.

As a bonus, here’s the end of the 1936 documentary The Night Mail, about the early twentieth century’s tea-and-iron Internet, the postal trains of Britain’s Great Northern Railway—featuring nail-biting, high speed packet-switching choreography and a poem by W. H. Auden celebrating the heroics of fast-moving machines. All without a canine mascot, arsenic-laced or otherwise.