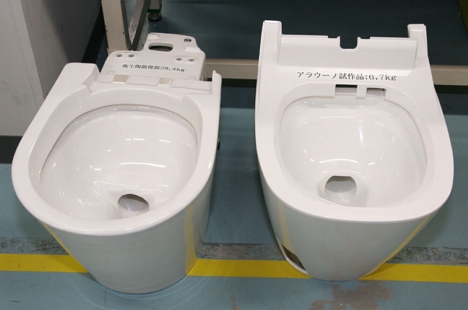 We have non-stick glue, non-stick pan, today we have non-stick toilets, thanks to the Japanese material scientists at Matsushita (Panasonic/National). The secret is that they’re using resin-based materials instead of the usual clay. During an interview with Mr Sakai from Matsushita, we learned that their team had spent more than a year to research on resin modification, in order to have it strong enough to withstand the sheer force of having us cough-potatoes sit on top.

And that’s not the end of the story, Mr Sakai also spoke of the theory of self-generated bubbles during flushing, making them useful in brushing off the dirt in the toilet. Mr Sakai claimed that this might be the biggest breakthrough ever since the introduction of “tankless toilets” at home, putting that side by side with the jump to flat-screen TVs. The marketing claim of “no clean up for 3 months” is apparently valid, and the new Alauno series is selling pretty well. The rest of the interview was about minimizing the gap between the ring and the toilet, adding a detergent tank just like your washing machine, and adding fancy lights so that you won’t bump at night.

The Alauno toilets are priced from a whooping $3000, keep in mind that they’re very intelligent toilets, they can do anything from spraying warm water to your buttocks to flushing automatically after you stood up, or even opening up the cover by themselves as you approach them. Let’s see if these toilets will get exported. —Sam Chan