Nokia sues shops, but not the N73 clone manufacturer 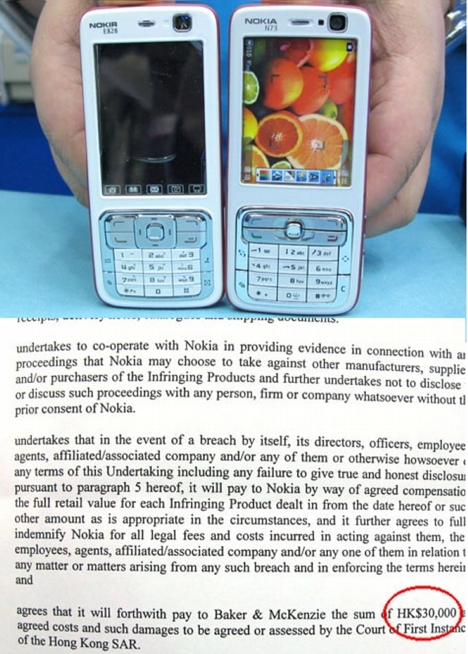 Pictured above is the infamous N73-clone, called Nokir E828, produced by a mainland Chinese company (NOKIR) next to the real Nokia N73 (on the right), it has been selling well enough to catch Nokia’s attention. However the company did not have enough evidence to go against the manufacturer and the copyright-protection laws are a bit tricky in mainland China, so instead they decided to bully the tiny tiny shops that are selling the Nokir E828 in Hong Kong. Those poor scapegoats are asked by the representing law firm to relinquish all the stock voluntarily and pay a HKD 30,000 ($3870) fine for the damage incurred. Most of those shops are only run by 1-2 people in a space no bigger than 25 squared feet in Mong Kok (a more ghetto part of Hong Kong). According to the shopkeepers, they’ve been trying to get in touch with Nokia as the deal is not fair, so far they have received no reply.

The Nokir E828 is a dualband GSM phone that houses a 2.6″ QVGA touchscreen and a 2 megapixels camera. MP3 and MP4 are supported and the memory expansion used is microSD. Being smaller and lighter than the N73 (110x55x14mm 105g), the E828 seems to have everything a fanboy would dream of, check out the $100 price tag, too: unbeatable. You’ll have to be very lucky to find any of these after this incident though. —Sam Chan