NeXT! The First Web Server 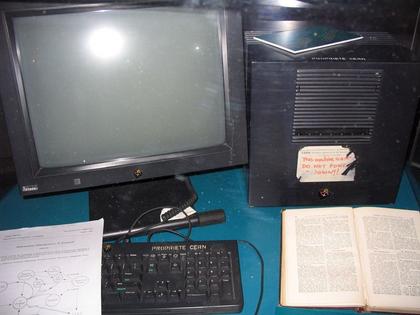 Found on Wikipedia, this image is (purportedly) the first web server on the World Wide Web. It’s an old NeXTCube machine that Tim Berners-Lee used at the CERN lab in Geneva, Switzerland. In case you weren’t aware, our handsome publisher, Steve Rufer, is also from Geneva. So in honor of Steve Jobs and our dignity, we’re going to beg him to break into the Microcosm museum and steal it for us. We want to destroy the computer that became catalyst for MySpace and Goatse.