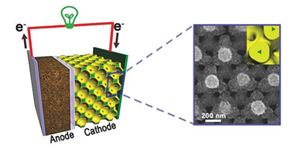 It’s no secret that electric cars take an inconveniently long time to charge. In fact, if you cut charge times in half, you’re still talking about a four-hour chunk of time to charge your vehicle. It’s a problem that doesn’t appear to have any kind of resolution in the near future, but research from the University of Illinois does hold some promise.

This system that we have gives you capacitor-like power with battery-like energy. Most capacitors store very little energy. They can release it very fast, but they can’t hold much. Most batteries store a reasonably large amount of energy, but they can’t provide or receive energy rapidly. This does both.

That is University of Illinois professor Paul Braun, speaking of a new battery that is being developed at the university. This battery utilizes a 3D film that has shown that it can charge between ten and one hundred-times faster than a conventional battery. In regards to the batteries being developed by Braun and his team, the 3D film was molded into an actual 3D structure, which greatly increases the storage capacity.

The future is now, people!