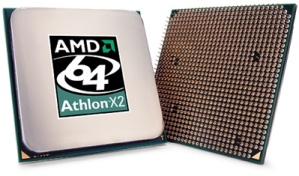 The first 65 nanometer chips made by AMD have just arrived. The codename for these chips is Brisbane, and they are a welcome addition to the Athlon 64 line. Probably the most significant part of these new chips is a transition to 65nm from the previously held 90nm AMD CPUs. Like nearly every processor released nowadays, the Brisbane line is being labeled as capable of faster processing with lower power consumption. These new processors will be adopted by Acer, Dell, Founder, Gateway, HP, Lenovo, and Packard Bell beginning in quarter one of 2007. With the upcoming release of Windows Vista for the individual user, AMD claims this processor will be better equipped to handle the high-resolution 3D visual effects of Aero.