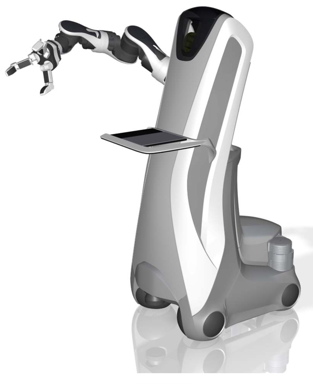 Thanks to a team of German scientists, robotically-enabled laziness may soon be a reality. The good people at the Fraunhofer Institute for Manufacturing Engineering and Automation IPA in Stuttgart have revealed what they’re calling the prototype of a new generation of service robots,” the Care-O-bot 3. This one-armed robot can serve drinks and carry items from one room to another. It moves on a platform with “four separately steered and driven wheels” that allow it to travel in any direction. The Care-O-bot can identify objects thanks to color cameras, laser scanners, and a 3D range camera. The camera allow it to be directed with hand gestures as well as spoken commands. It can also learn to recognize unfamiliar items like cups and bottles.

The Fraunhofer folks say their robot is all about helping the handicapped, but it’s clearly also ideal for drunks. These Germans have their priorities straight. First they brought us Oktoberfest and now they’ve made this robot that basically can do nothing but serve booze. Care-O-bot 3 seems to be a long way off from being able to mop or wash dishes, but with its flexible highly articulated arm it can clean up small messes and carry items on command. Get this thing and one of those Roomba vacuums and you should be well on your way to living the dream of completely automated errands.