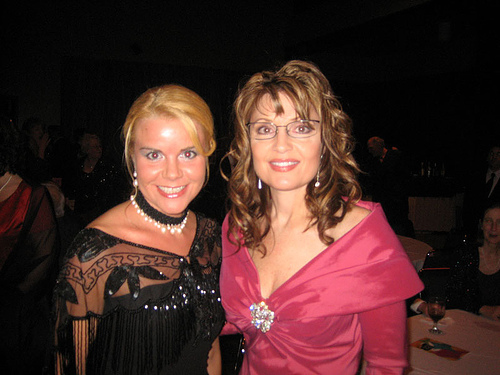 Huge news today. John McCain, the Republican nominee eying the White House in November, just announced that his vice presidential candidate will be Sarah Palin (on the right, obviously), a real hot piece of ass from Alaska. This 44-year-old soccer mom most likely did a ton of coke back in the ’80s when she was a star basketball player and is now married and the Governor of Alaska. She’s young, full of sass and most importantly, a hottie.

Did I mention she eats Moose Burger? Interpret that however you please.

Surely some of you are concerned about her political record. Allow me to reassure you that Palin has the experience we need to lead this country:

In 1984, after winning the Miss Wasilla contest earlier that year, Palin finished second in the Miss Alaska beauty pageant which won her a scholarship to help pay her way through college.[4] In the Wasilla pageant, she played the flute and also won Miss Congeniality.

She gets high, too! Wikipedia says that Palin “…admits that she used marijuana when it was legal in Alaska, but says that she did not like it.”

Gentlemen, Ladies. I think we have a careful decision to make come November: left-hand or right-hand?