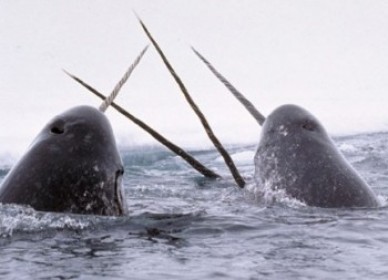 Gearfuse readers may not know that among other things, I also write fiction.

For awhile now, I’ve toyed with the idea of telling a story in Twitter. But I’ve been reluctant to plunge in; too few Twitter fiction experiments have worked (while those that have inspired me are not as well known as they should be).

I’m taking the plunge, though. My model is the serial story of pre-golden age science fiction, although the setting is contemporary, and scheduling will be tweaked for today’s social media.

Over three days I’ll be spinning a yarn in tweets; called “Makes the Man,” it will feature narwhals, neural hacking, uncanny wearable computers, and mayhem on the Arctic ice. Ultimately, I’ll aggregate the whole thing in one place, along with any piquant or contrapuntal tweets, images, sounds, or videos that come the story’s way in the course of the telling. Beginning today at noon eastern time, I’ll send it out from my personal account, @MatthewBattles; you’ll also find it via the hashtag #maketheman. I hope you’ll follow, read, and enjoy!