MacBook Nano: Is it possible? 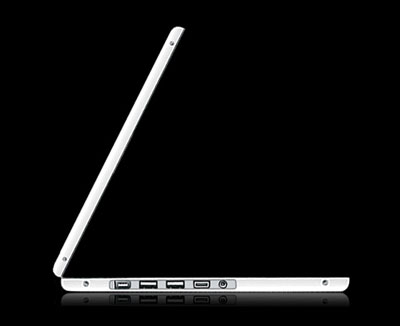 Seeing this picture made our hopes rise, but they were quickly ducked down a notch. The photo is actually a fantasy mock-up of from Electro^Plankton. This doesn’t mean that we’ll never see something like this as a physical object though. The possibility is there for such an object to be created, maybe sooner then we think. What would be Apple’s motivation behind creating a smaller, meaner, ultra portable MacBook?

One place sales for Apple have lacked is in Japan, where the more portable and slim a product is, the more its going to sell. This is not to say that sales are low in Japan, just LOWER. Something like this MacBook Nano would boost Apples sales to an even higher amount. Plus it’s just really, really cool looking. Don’t think its possible? Catch the jump for an explanation on how it is.

Electro^Plankton lists the possible specs of a MacBook Nano as such:

Seems odd, we know. But a notebook of such little size would not have a great amount of battery life. By removing the Hard Drive, and instead adding solid state memory, enough room is free for an extra boost of battery power.

Another important aspect of Apple’s popularity is their forward thinking on design. While the ultra-slim and compact Japan models of notebooks have become cramped and too minuscule for easy usability, Apple has always maintained a easy to use user interface. we wouldn’t expect anything less for the MacBook Nano. By taking Electro^Plankton’s idea of a smaller or maybe even non-existent bezel, the display would go edge to edge, creating the illusion of a bigger picture.

What would the MacBook Nano mean for us? Many envious friends. — Andrew Dobrow