Little Late On The Beer Belt 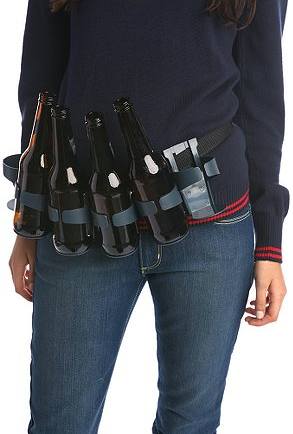 Not every belt is built for hard liquor. Some are built for hops lovers others for gay pirates, but man oh man, I could’ve used this in high school. As for college, I slept next to a mini-fridge, no $18 beer belt needed. This belt reminds me of my senior year in high school. The chess team had just won their final match and needless to say I was ecstatic. Some of the “in crowd” were throwing a “school’s out for the summer” party, complete with Alice Cooper music and all. Yet, when I showed up with a friend of mine, we were not welcome. This made my blood boil.

When my blood boils, I do stupid shit. The kind of crap you go to jail for. While all the party goers were in the basement, dicking around with their inflatable Beer Pong Table, my friend and I raided the fridge.  For one reason or another, no one at this party was anywhere near the beer-filled fridge. Bad move. Unfortunately, like every other person,  I only have two hands. If only I had had this beer belt, I would’ve been able to grab more than the six beers I shoved in my cargo pockets and the two beers in each of my hands. Contrary to popular belief, another six beers will make a difference.