Lighting Drone to the Photographer’s Rescue 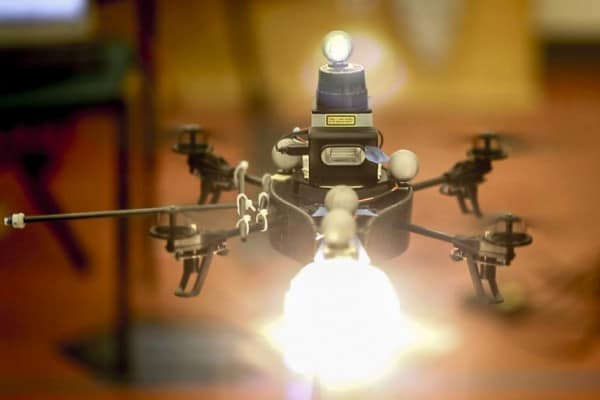 For those of you who enjoy photography, lighting is a perennial concern. Firstly, it takes forever to perfectly position the lighting in your set. Secondly, it takes all of 5 seconds of moving on part of the model to foil your efforts. Researchers at MIT, though, have an impressive solution. They propose using fleets of drones to automatically light your shoot.

How does the system work?

The prototype system uses a lightweight UAV to achieve “rim lighting” – an effect in which one edge of the subject is lit especially well. The photographer can set the width of the lit border as desired. Thereafter the lighting drone takes over to create the effect. It can automatically adjust its position in response to any movement on part of the subject – whether stationary or human. What’s more, as system co-designer Manohar Srikanth notes, the lighting drone can even compensate for the photographer’s movements! How is this achieved, you ask? The drone provides its controlling computer with a sample image 20 times per second. This helps the computer update and optimize the position of the subject. But wouldn’t these pictures take up a mind boggling amount of memory? The simple answer: no. The sample pictures aren’t stored on your camera’s memory card at all. Instead, they are streamed, and thereby bypass local storage. Future versions of the system will likely be able to incorporate a number of lighting drones working together to produce a myriad of complex effects – sans the usual breakdown and reset that the manual process inevitably includes.

Could the drones replace your new lighting assistant?

The lighting drones would eliminate the need for carrying around and positioning weighted stands. The fact that they are battery operated also means that you no longer require people to run cabling to a power source. You could simply map out where you want each light positioned, and hit go. The drones would then automatically not only maneuver themselves into position but also make adjustments as the ambient lighting changes. So, yes, switching to the lighting drones may well help you cut down on labour costs and overall shoot time. In fact, so far as you get your own coffee, the drones may even effectively substitute your lighting assistants!

When can we expect to see it?

MIT has confirmed that the prototype of the new system will be on display in August at the International Symposium on Computational Aesthetics in Graphics, Visualization and Imaging.

So, do the lighting drones indicate the dawn of a whole new phase of photography? Who knows, they very well may. After all, it’s MIT. When have they ever failed to impress?