Remember last week, all of the news stories of a new LG DVD player that had broken the barrier that stood between the new next gen DVD formats? That player, the BH100, has officially been released at CES. Any new news? Yes, they also announced that there will be a drive for the PC released also due in Q1 of 2007, called GGW-H10N. While the BH100 is a proud supporter of 1080p playback through HDMI, component- and composite-video outputs, the GGW-H10N is limited in it’s playback and recording capabilities. It has been announced that it will have a fully functional read and writer for CD & DVDs, and that it will also support BD-R and BD-RE, but that’s where the writing capabilities stop. It will only be able to read HD-DVDs and some of the online interactive features will be crippled.

One last note on design. The GGW-H10N looks just like a normal PC drive, a bland off-white that won’t stand out, but the BH100 looks like it was made out of Chocolate phones. It even has the same kind of backlight touch sensitive control buttons. No prices on the GGW-H10N, but the BH100 is said to sell for $1,200… Ouch. 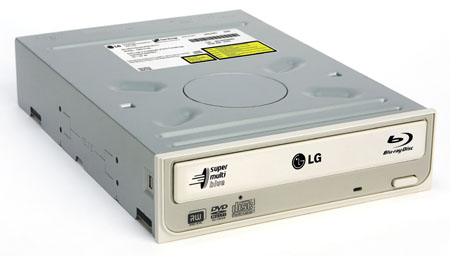