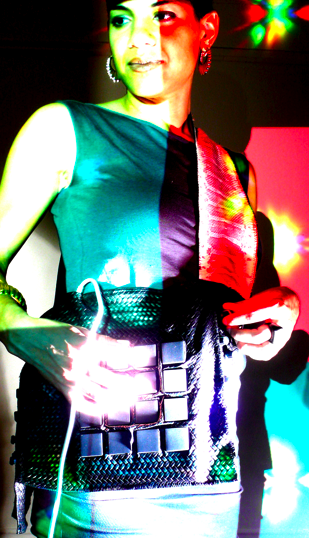 Looks like NYC-based artist Rucyl Mills and I have a lot in common. We both love music and hacked M-Audio equipment for MIDI purposes. It’s wearable, it’s ugly and it’s ready to rock.

I built the elektro-07 so I could control the sonic and visual parameters of my live performances without having to look deep into the eye of my laptop, hunched over in computer music stance. I’m still learning how to play it.. Software wise, it runs a maxMSP/Jitter patch smoothly, connected to my laptop by a long usb cable. Major thanks to Luke DuBois. Originally it was named the Chakakhantroller after Chaka Khan… but you wouldn’t believe how many people don’t get the reference.. so I changed it to Elektro-07 after my newly launched label, Elektrocardio. Next version will be wireless, and yes… it’s made of black leather and snakeskin.