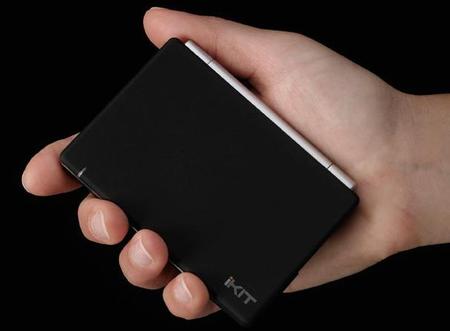 It’s official – laptops can’t get any smaller. If they did, reading and typing on them would be an impossible task. I thought the Dell Inspiron Mini 9 was small, but the IMOVIO iKIT takes the cake. The cupcake, that is.

This thing is unnecessarily too small. It’s dimensions are 95 x 65 x 15.5 mm and it weighs almost half the weight of a Nintendo DS Lite and 20g less than an iPhone, so it’s pretty damn tiny. It also manages to pack a full QWERTY keyboard and a 2.8″ QVGA screen on this thing. For $170, you’re not getting much of a computer. It runs on a Marvell PXA270 312MHz CPU, uses a trimmed-down Linux OS and has 64MB of RAM, so don’t expect a powerhouse in the palm of your hand. For some reason this little thing even has Bluetooth 2.0, 802.11b/g WiFi and can amazingly sustain enough juice to keep it going for three hours. Seriously, do laptops need to be this small?