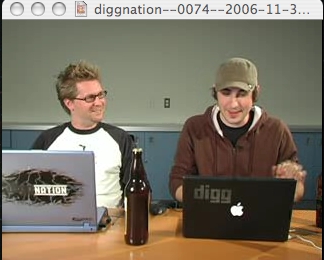 The rumors continuing to circulate, this time digg founder, diggnation host, and of course former Tech-TV’er Kevin Rose predicts the iPhone. Does this come as a surprise? It shouldn’t, and Rose has some credentials as well. Kevin predicted the nano launch in 2005 and now is calling out Apple to release the iPhone in January. Kevin states some obvious facts such as a launch on all providers including both CDMA and GSM and the possibility of a touch screen. However he is predicting that it will have a slide-out keyboard, it will use flash memory with a 4GB model for $249 and an 8GB model for $449. In addition to the memory, Rose believes the iPhone will have a ‘two battery design’ one will be used for the phone and the other for music. — Zach Wilt