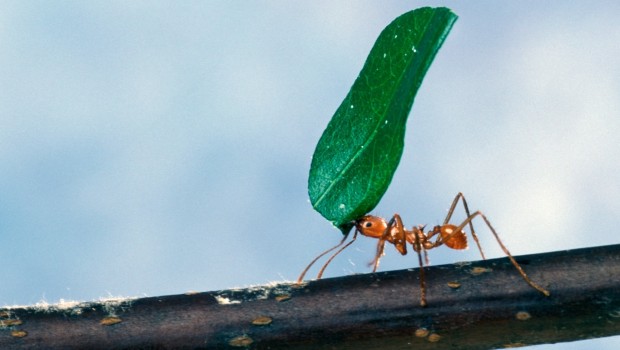 Kevin Kelly adopts a bracingly broad notion of technology; citing birds’ nests and the rudimentary tools of the great apes, he wants to include everything that living things do to alter their environment. One of the most evocative examples of animal technology is that of the social insects—especially the highly-evolved species of leaf-cutter ants that harvest plant material to feed vast underground colonies of fungi, which serve as their sole source of food. Highly dependent on specific fungi that are vulnerable to pests and the vagaries of the environment, these social insects have evolved behaviors and modes of sociability that rival those of humankind in their complexity. “(T)he brain capacity of individual ants has probably been pushed closed to the limit” by evolution, writes E. O. Wilson. “Beyond a certain limit, the evolving lines built advances upon social organization.”

In Kelly’s definition, technology is this kind of system: a burgeoning network of interdepencies striving towards autonomy. This willful entity, which he calls the technium, is forever on the move:

After 10,000 years of slow evolution and 200 years of incredible intricate exfoliation, the technium is maturing into its own thing. Its sustaining network of self-reinforcing processes and parts have given it a noticeable measure of autonomy. It may have once been as simple as an old computer program, merely parroting what we told it, but now it is more like a very complex organism that often follows its own urges.

Kelly admits that his argument about the technium’s burgeoning autonomy sounds bold. But as he points out, we define autonomy in different ways; it’s not a binary quality, but admits to shades and gradations—and often it’s distributed in surprising ways. “A newborn wildebeest will run on its own the day after it is born,” he points out. “But we can’t say a human infant is an autonomous being if it will die without its mother for its first years.” Autonomy, he goes on to say, is a fuzzy set of traits like self-repair, self-defense, and self-improvement. All living things exhibit some or all of these traits; increasingly, technological artifacts make use of them as well. “Autonomous airplane drones can self-steer and stay aloft for hours,” Kelly writes. “But they don’t repair themselves. Communications networks can repair themselves. But thet don’t reproduce themselves. We have self-reproducing computer viruses, but they don’t improve themselves.”

To Kelly, the advance guard of the technium is to be found among the quadrillions of computer chips networked into vast electronic systems—one very small slice of which we’re occupying or intersecting with right now in this blog post. “When computer scientists dissect the massive rivers of traffic flowing through it,” Kelly writes, “they cannot account for the source of all the bits…. The technium is whispering to itself.” And more:

Further analysis of the information flowing through the technium’s network reveals that it has slowly been shifting its methods of organization. In the telephone system a century ago, messages dispersed across the network in a pattern that mathematicians associate with randomness. But in the last decade, the flow of bits has become statistically more similar to the patterns found in self-organized systems. For one thing, the global network exhibits self-similarity, also known as a fractal pattern. We see this kind of fractal pattern in the way the jagged outline of tree branches looks similar no matter whether we look at them up close or far away…. (A)utonomy is often self-evident long before it can be proved.

And now I want to put on the brakes a little bit. Fractal patterns are abundant in nature—and they crop up in nonliving physical systems at least as much as in living systems. Crystals and coastlines both display fractal patterns; but even under the broadest definition of autonomy, we would never say that snowflakes or the Sea of Cortez “want” in any real sense of the word. Furthermore, the self-similarity of information flow in networks today is a product of engineering decisions, not merely an emergent artifact of independent evolution.

Kelly’s conception of the technium as a force vaulting into autonomy by means of interdepence is grand, though. There’s something paradoxical, even tragic about it. But the notion that technology wants implies technology has a direction, a goal, a telos: the technium isn’t a stable entity, but is always growing, always evolving, like a shark that must keep swimming in order to wash its gills with oxygenated water. And yet what if technology isn’t always evolving in this way—what if it doesn’t have a direction at all? I admit that it’s hard to imagine, given the massive and ramifying transformations we see in technology all around us, every day. But it’s worth remembering that it hasn’t always been that way. As Jared Diamond has discussed, the state of culture on the island of Tasmania offers a case of the ephemerality of technology: when cut off from Australia ten thousand years ago, Tasmania’s remnant human population was so low that some technologies—fishing, bone toolmaking, even the ability to start a fire—were locally forgotten. (In a later chapter, Kelly will argue, quite compellingly, that no technology is ever forgotten.) On the mainland, meanwhile, and throughout human history, simple technologies remained stable and unchanged for tens of thousands of years.

Elsewhere throughout Kelly’s wonted technium, the case for progressive autonomy is even harder to make. Remember the leafcutter ants? their agricultural technology evolved 50 to 60 million years ago, and has changed very little (compared to present-day human tools) since its emergence. The technium, if it exists, has been a slacker for most of its history. Perhaps the expanding complexity of present technology is part of a trend emerging out of deep history; perhaps it’s only an accident, a latter-day congeries of conditions and desires. It may be difficult to discern whether the desires driving that process belong to technology, or are our own. But it would be unfair to Kelly to imply that he admits no role for human agency. Whether it “wants” or not, Kelly concludes at the end of his first chapter, “we don’t have to do everything that the technium demands.” To demonstrate how we achieve this balance, when technology wants everything we can give it, is the task Kelly’s book sets for itself.

Second in a series of posts about Kevin Kelly’s new book, “What Technology Wants.”