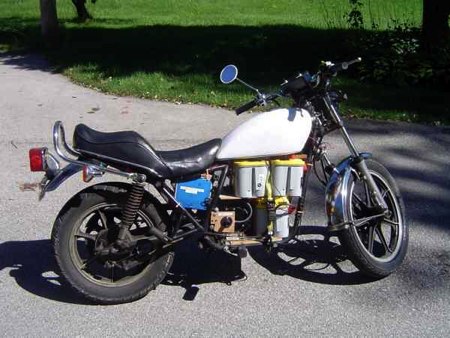 I’ve always wanted a motorcycle but I don’t think I’m responsible enough to ride open-air-style down a highway at 120 MPH. Ben Nelson, however, is more of a risk taker. The lucky sonofabitch got a 1981 Kawasaki KZ440 motorcycle for a mere $100. He swapped out the (broken) motor and was able to add four huge batteries for $160 and a $500 Etek motor. Two weekends of work later, Ben has a new hog.

It’s probably not as fast or badass-sounding as the original motor but you can’t beat this kind of mileage. While it can only do 45 MPH and run for 20 miles on a charge, Ben’s motorcycle hack is the perfect answer for beating the oil game, going green and having a fun project to work on. Besides, it’s ten times cooler than that ugly electric motorcycle those high schoolers made.