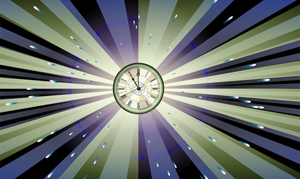 The earthquake/tsunami/nuclear meltdown/volcanic eruption in Japan has been in the news quite a lot as of late, and for good reason. One of the unanticipated and, really, unnoticed side effects of the Japanese disaster is that it kinda, sorta stopped time.

…okay, not really. It just sounds cooler when you say it like that.

In actuality, the earthquake and tsunami knocked out two atomic clock transmission stations in Otakadoya and Kyushu, both near the Fukushima Daiichi nuclear plant. The problem wasn’t immediately noticed by the general public, though people in Japan who owned atomic watches began to realize that their devices were no longer working properly on March 12th, the day after the earthquake.

As of right now, the National Institute of Information and Communications and Technology, who transmits the signal, has no clue as to when their service might resume. They did point out, however, that there is no risk of radiation from their atomic transmitters, as they use non-radioactive caesium atoms.

This is why I still use a sundial.