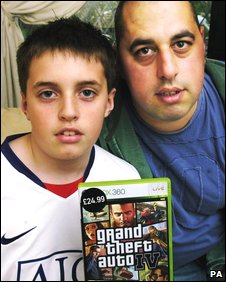 So, here’s the deal. Some dude bought two used copies of Grand Theft Auto games for his 12-year-old son and was surprised to find a few ecstasy pills wrapped in cling wrap, hidden in the video game’s manual. Instead of quietly thanking the gaming gods and grabbing the nearest bottle of water, the father decided to cause a little scuff, claiming that his kids, whom apparently play XBox constantly, could have died if they had taken the mysterious pills.

Dude, if your 12-year-old son is still swallowing random things he finds wrapped in suspicious looking cling wrap, it’s safe to say he shouldn’t be playing Grand Theft Auto in the first place. Not to mention the little gaming addict is wearing an AIG shirt. I mean, really? Teach your son some values.