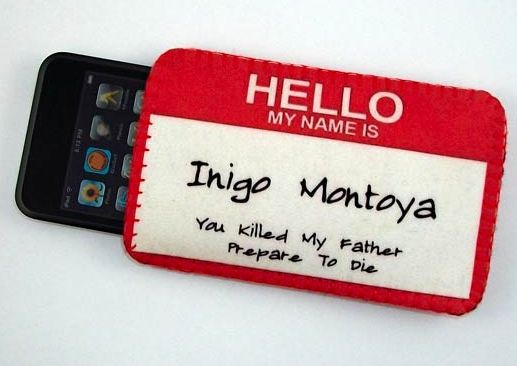 Imagine this. Let’s just say your name happens to be, oh, I don’t know, Fred Savage, and your grandfather happens to be a book obsessed Peter Falk impersonator. Say he walks into your bedroom one day when you’re coughing your ass off, I mean hacking up a fuckin’ lung, and he starts rambling about some six-fingered man and a rhyming giant. I know, you’d think to yourself, great, Grandpa has finally lost it and there’s nothing I can do about it. He’s probably going to murder me in my sleep and mom won’t care because she loves her batshit crazy father. Awesome.

But instead of murdering you, maybe Grandpa Pete just wants to gift upon you a miraculous piece of Princess Bride gadgetry. The Inigo Montoya Nametag iPhone case allows you to feel as though you too need to take revenge against the six-fingered man. Damn him and his extra limb of evil. Damn him to hell. But first, let’s make sure our iPhone doesn’t get scuffed up in the impending battle, shall we, hmmm?