In name of the Wii, Xbox 360 display boxes vandalized in an act of guerrilla hack marketing 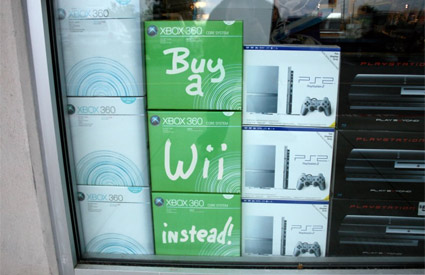 Some geek out there really doesn’t want us to buy an Xbox 360, and they aren’t afraid to throw it in our faces either. While one of the game store owners was distracted, over-zealous gamer Dustin Wilson took a white marker and wrote the words “Buy a Wii instead!” on the three Xbox display boxes in the window of the store.

The antic is an entry to the EvWiiWhere Challenge, a contest for Wii fans to show the word Wii spelled out in unconventional ways. The vandalism of the 360 box seems a little immature for our tastes. But who knows. Those Xbox boxes in question could be worth a lot more now. We’re sure Miyamoto is thrilled with these fanboy antics. — Andrew Dobrow