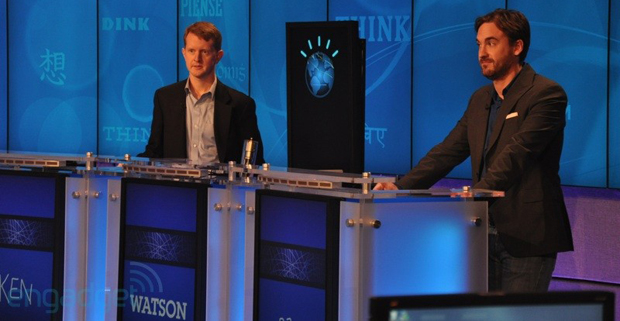 Over the past three days on Jeopardy, past champions Ken “It’s Obvious that Alex is Tired of Your Face” Jennings and Brad “Nobody Remembers Who I Am” Rutter faced off against an IBM Supercomputer by the name of Watson.

To say that it was a shellacking would be almost too kind.

After three days of competition, the Watson was the clear winner, more than doubling both Jennings and Rutter combined. The tallies?

You have to give infinite credit to Ken Jennings, who conceded defeat to the computer through a clever Simpsons reference: “I, for one, welcome our new insect computer overlords.”

I, however, do not. As someone who watched The Terminator one-too-many times as a child, I know how this story is going to end… and I don’t like it. Nope. Not one bit. If you want to keep building smarter and faster computers, be my guest — but remember: no matter how smart you make it or how logical, it will never have the most important thing of all!

Watson’s $1 million grand prize will be donated to World Vision, a charitable organization that tries to help children around the world.