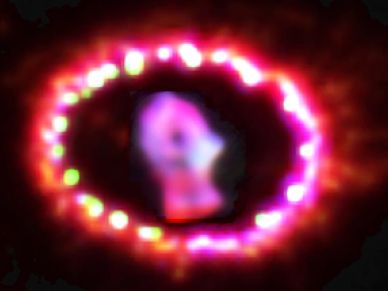 A new photo released by NASA shows the transition of a supernova to a supernova remnant, as displayed by the Hubble space telescope.

Supernova 1987A is the closest supernova explosion that we’ve witnessed in nearly 400 years. The transition of this supernova to a remnant is unprecedented, and has astronomers enraptured by the amazing imagery captured by the Hubble space telescope. Since this supernova is occurring so close to Earth, astronomers have had the unique opportunity to study the supernova as it has continued to evolve.

The debris in Supernova 1987A has faded over the years, though it just recently got significantly brighter. This means that a different source of power has caused the debris to light up. Astronomers are guessing that the debris from the Supernova has begun to impact with the surrounding ring, causing the spectacular shock-waves that are shown in this image.