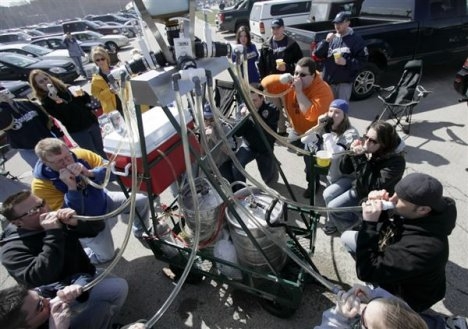 The unfortunate (and completely fictional) man quoted in the title might be missing his 12-Person Beer Bong for two reasons. One could be the fact that he hasn’t pulled out the old beer bong since his college days. Another reason could be that he is face down, laying on top of it, but is a few too many digits high on the breathalyser scale to realize it.

This 12-Person Beer Bong is something that college kids will be clamoring over. The Beer Bong weighs about 600 lbs when fully loaded and can do some serious damage to backs and brain cells. Connected to 2 kegs, the bong serves two beers per person during a group chug and also features a beer bubbler. Perfect for college kids and sports fans alike. — Andrew Dobrow