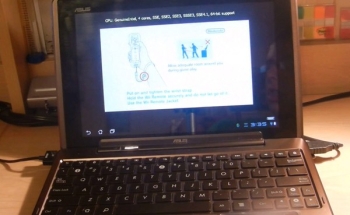 Like it or not, Obiwan222222 has become something of an internet celebrity.

Okay, maybe “celebrity” is a bit exaggeratory, but in the modding world, this guy might have just struck gold. He’s released a video showing how he manages to play Wii titles on his Android Tablet.

With cloud gaming still in its relative infancy, this is certainly an interesting workaround for dedicated modders. The setup used is actually quite simple – a Wii game is loaded onto a PC with an emulator (in this case he used Dolphin, an open-source emulator). Then, a remote desktop app streams the game to the tablet. In this case, Splashtop HD is used, since it’s one of the best remote desktop apps for Android.

There’s surprisingly little lag in this demonstration. It’ll be interesting to see if Obiwan222222 releases any additional videos about streaming Wii games to his Android tablet.