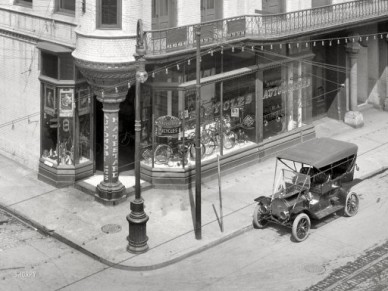 I’ve been to many places in the world, the poorest and the richest, spots, the oldest and the newest cities, the fastest and the slowest culture, and it is my observation that when given a chance, people who walk will buy a bicycle, people who ride a bike will get a scooter, people riding a scooter will upgrade to a car, and those with a car will dream of a plane. Farmers everywhere trade their ox plows for tractors, their gourd bowls for tin ones, their sandals for shoes. Always. Insignificantly few ever go back.

—Kevin Kelly in What Technology Wants. I’m gearing up to resume my serial review of Kelly’s fascinating book about humankind’s role in the evolution of technology; the quote comes from chapter 5, “Deep Progress,” where Kelly considers some of the ramifications of the progressive dynamic it describes. One thing worth noting about the erotics of technology: figured from the perspective of human happiness, it’s hard to tell whether progress is a feature or a bug. The walker wants a bicycle, but the bicycle doesn’t guarantee relief—in most cases, it only goads the rider on to new wants. The walker may become a rider, but little else changes; life must still be lived, pain suffered, happiness sought after, disappointments endured.

Of course, technology doesn’t need to make us happy—indeed if it is capable of wanting, as Kelly suggests it is, it would be advised against wanting our happiness. From the point of view of a selfish technium, happiness is the bug: too much of it gets in the way of technology pursuing its fate or telos or autonomous ends. Our selfish genes, after all, never propagated themselves by placing happiness at the top of their agenda, much less the happiness of the denizens of the biosphere as a whole. Think of the females of a certain species of parasitic fly who live out their entire lives, wingless and blind, in the abdomen of their wasp hosts. The question, when it comes to technology’s evolutionary drive: are we technology’s host, or its pest? We could end up wingless and blind in the belly of technology, and technology would not mind at all.