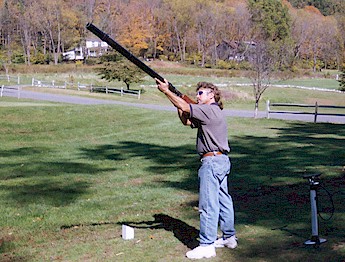 At first look, the Golf Ball Launcher looks like an oversized badass shotgun, manned by some Rambo-esque figure. Though, with much of the tech product world, first looks can be deceiving. Despite its dangerous appearance, it is actutally a new tool for one of the less violent games. This golf ball launcher attached to this mullet-donning man’s hands is actually a new invention to pep up the game of golf.

The Launcher is capable of projecting balls (hehe we giggle at the naughtiness that could have been) from 25 to 300 yards, so no more sissy clubbing. I’d love to see the reactions of people at the golf course when you whip this thing out. And if they look at you funny? Just take aim and fire. — Andrew Dobrow