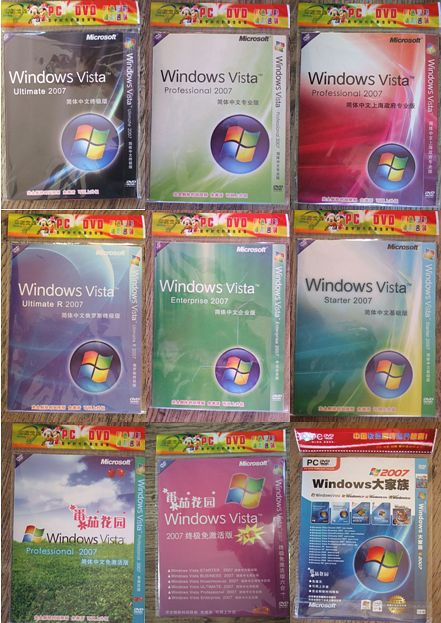 Whilst Microsoft was bragging about the sales number of their latest OS Windows Vista, few would actually know that they have only managed to sell 244 copies in the whole of China in the first 2 weeks. You heard that right, and that’s the number quoted from the headquarters of the Windows Vista chief (90% national volume) distributor in Beijing.

We have gathered these pictures for you, showing various versions of illegal copies; some also come with Office, Linux, MacOS and Windows 98/Me/2000/XP on the same disc. However not all of them are reliable and not all files written on the box can be found on the disc. Most of these copies make use of the Timestop hack (out of the 6 other mainstream hacks), so that users don’t have to go through the process of activation, and still manage to use the Windows Update service. But here at Gearfuse we advise our readers to respect copyright laws. —Sam Chan

Source in Chinese
Source in Japanese