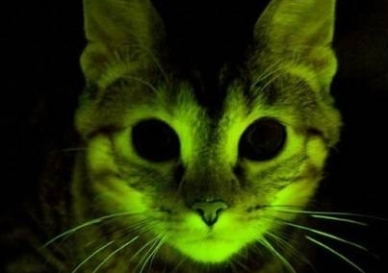 Scientists have genetically modified several cats to be resistant to AIDS.

Oh, did we mention that these cats also glow with green fluorescent light?

Feline AIDS is caused by a virus, much the same as human AIDS. Scientists inserted monkey genes that block AIDS into feline eggs, prior to fertilization.

The glowing effect comes from jellyfish genes that were used to “mark” the monkey genes, making them easy for researchers to spot.

After the cats were born from the genetically altered eggs, scientists took cell samples. They discovered that the modified cats were resistant to FIV, which is the virus that causes AIDS in felines.

The AIDS-resistant monkey genes were inserted into the feline eggs by using a non-harmful virus.

Hopefully, this discovery helps researchers continue their quest to understand how to prevent AIDS in humans.