Fujitsu’s interactive UBWall in the wild, cramming products down your throat 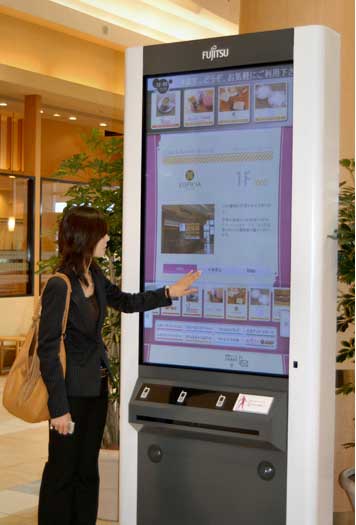 The UBWall is a Fujitsu-made concept which has burrowed its way out from under the R&D walls into Japan’s busy consumer district. UBWall is an interactive touch display with integrated Wi-Fi and RFID capabilities which first appeared about two years ago, but is only recently being used in the wild.

Financial-services company Nomura Securities is installing an still undecided amount of the UBWall terminals in a number of their institutions with the goal of providing customers with relevant information. UBWall contains a gigantic 50-inch plasma screen which lies dormant in “attract” mode until a customer approaches, which is detected through motion sensors. The integration of RFID into UBWall allows for any brochures or information about the company to be wirelessly sent to their mobile device, which really is pretty damn cool. — Andrew Dobrow