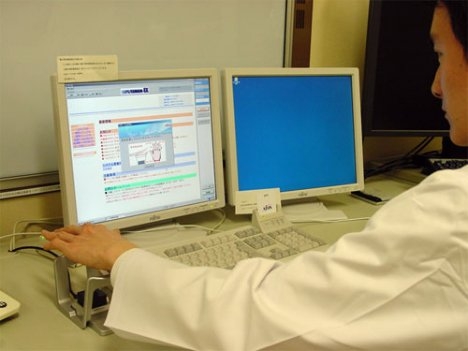 If you’ve been weirded out by finger print scanning biometrics, then prepare to be even more unsure. Fujitsu announced its implementation of its PalmSecure Biometric Authentication System which reads the veins in your palm instead of finger prints. The PalmSecure went to work at the Hospital for Charged Particle Therapy at the National Institute of Radiological Studies (NIRS) near Tokyo, Japan.

Physicians and medics who are in need of a patient’s medical file are issued a smartcard implanted with an IC chip which holds a scan of the patient’s palm vein pattern. To unlock the information, a medic inserts the card into a card reader, and scans the patient’s hand on the palm reader. Fujitsu claims that the system is extremely reliable, with a false acceptance rate of less then 0.00008% and false rejection rate of 0.01%, adding that the complexity of palm veins makes it almost impossible to forge. — Andrew Dobrow