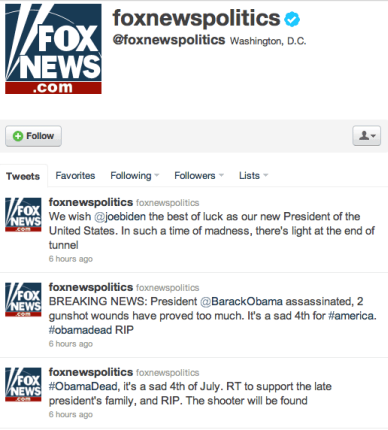 Well, hackers have done it again. This time, they’ve hacked into the Fox News Twitter feed. Their prank? To publish a false report that President Obama has been killed.

The tweets were up on the feed for several hours before finally being taken down.

One of the tweets from @FoxNewsPolitics said Obama was “shot twice at a Ross’ restaurant in Iowa while campaigning. RIP Obama, best regards to the Obama family.”

It seems that the fake tweets helped generate a substantial number of followers for @FoxNewsPolitics. Following the fake news tweets, the account’s followers jumped by around 3,000.

There have been statements released by a “representative” of the hackers, who claims that the hacking was carried out by a group called the “Script Kiddies”, who are apparently an offshoot of Anonymous.