For smaller lenses, look to the smallest insects 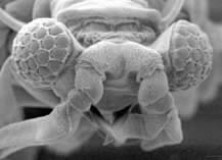 Strepsipteran flies are nothing like the fat, hairy houseflies that buzz around your kitchen in the summertime. Parasitic flies that live on wasps, they’re exceedingly tiny—so small, in fact, that their compound eyes are organized differently from those of other insects. Most compound eyes consists of hundreds of eyelets or ommatidia, each of which contributes the equivalent of a single pixel to the final “image.” It’s a simple system neurologically, although it takes a lot of ommatidia to make a high-resolution image. Strepsipterans have comparatively fewer ommatidia—Xenos peckii, the strepsipteran whose eyes have been described most thoroughly, has fifty—arrayed in bulging domes. (See electronic micrograph at left; it’s interestng to note that only the male strepsipterans have these eyes; females live their entire lives in the bodies of host wasps. One academic paper calls the mating of strepsipterans “controversial”; we must assume it’s doubly so among the wasps.)

About ten years ago, scientists discovered that the individual eyelets each resolve complete images, which the fly’s brain then stitches together to form a complete picture—a kind of chunk sampling that uses more computing power, but less real estate—which, on a head as small as that of Xenos peckii, is a precious commodity.

Now, scientists are using the eyes of Xenos peckii to inspire a new kind of tiny, wafer-thin lens for digital imaging. They start by fabricating an array of microlenses in the form of a thin film, and then sandwich that with a sensor that grabs those images and processes them into a single composite picture. The resulting electronic cluster eye, or “eCley,” can be quite small—the working prototype isn’t much larger than a penny. 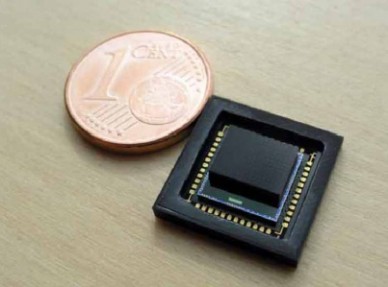 It’s not the first electronic lens that the eyes of Xenos peckii has inspired—an earlier model created for a night-vision lens for the military arrayed mobile-phone grade optical lenses in a domelike structure to image a much wider field of vision than possible with an individual lens. With electronics, that lens array is about the size of a hockey puck. By translating the design principles of the Xenos eye to the medium of superthin optical film, the current project (described in a paper published by German optical engineer Andreas Brückner and a group of colleagues) offers the prospect of sharper images from much smaller lens arrays. The 1.4-mm-thick prototype lens can resolve an image 700 pixels wide; in the future, such lenses might find applications not only in consumer electronics, but in miniaturized medical optics as well.