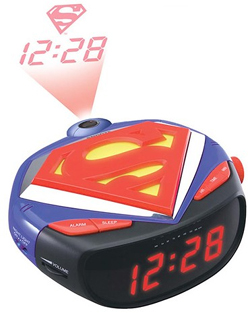 Ever since you were a little kid you’ve wanted to be like superman, running around in tights and having your own symbol for everyone to know you by; don’t deny it. Well now you can fulfill your dream (at least part of it) of being like Superman with the Superman Projection AM/FM Clock Radio; no, this does not give you permission as a grown man to run around in tights. This clock radio projects the time and the Superman sign on the wall for you to gloat at, and in the morning wakes you up to the Superman theme, as composed by John Williams. If you feel as if you aren’t ready to take on the world when the music starts playing, just smack the giant Superman symbol on the clock that acts a the snooze button. Also, for those of you who don’t feel worthy to hear Superman music (or you’re just sick of it), you can have a traditional, regular person alarm sound. With such a cheap price of $19.99, maybe you should get this just as a self-esteem booster; you can wake up imagining that someone wants to see you in tights. — Nick Rice