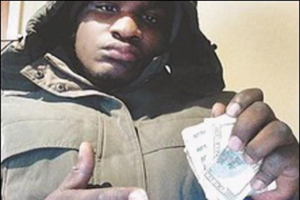 So, how dumb are you? No, I’m serious — ask yourself that question. How dumb are you? Once you’ve figured out the answer to that question, breathe a sigh of relief because I promise you that you will never be as dumb as Rodney Knight, who went to the Facebook page of Washinton Post writer Marc Fisher’s son to brag.

Knight swiped two laptop computers, a winter coat and $400 in cash. Before he left the house, Knight put on the coat and took a picture of himself holding the cash he stole. As though to think “that isn’t nearly enough salt,” Knight then published the photo on Facebook.

Their job being made comically easy, local police were able to locate and arrest Knight, who ultimately pleaded guilty to a count of second-degree burglary and a count of carrying a firearm without a license.