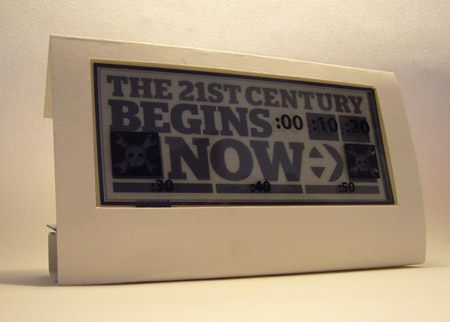 We found little purpose for the E-paper cover of Esquire magazine’s October 2008 issue. That’s not to say we didn’t like it. It’s stylish and way cooler than that “boobless” trick with a calculator. We just think it’s a little bulkier than it should be, considering it’s the cover of a magazine.

Hack a Day’s Ian Lesnet took the Esquire cover to the lab where they tore it apart like a guinea pig in Biology class. The resulting project formed something useful out of the E-paper cover that anyone can build: a digital clock. It might not be the coup de grâce of all clocks, but it’s still more useful than it was when it was a magazine cover.