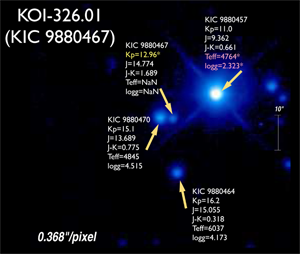 A while back the people working with the Kepler space telescope discovered a planet, KOI 326.01, which scientists thought to be the most “Earth-like” planet ever discovered. While it was initially believed to be a little too warm for humans (roughly 138 degrees Fahrenheit), the planet was the same general size of Earth and had the ability to support life.

Notice all this “past tense” talk? Yeah. Turns out that the calculations were off.

You see, KOI 326.01 is said to orbit around KIC 9880467. When the discovery of the planet was first announced, it was assumed that KIC 9880467 was brighter than KIC 9880457, its neighboring star. This mistake was made because, at the time of the image being snapped, some kind of object was hindering the Kepler telescope from properly reading the light output of the two stars. This affected the temperature readings taken by Kepler (using flickers of light from the stars to gauge such temperatures) and led the researchers to believe that JOI-326.01 was the Earth-like planet whose discovery was making the nightly news.

And now? Not only is it doubtful that KOI 326.01 is an Earth-like planet, there are questions about which star it orbits! So, who is to blame? Well… nobody. Kepler isn’t designed to identify planets, it’s to ascertain statistics in regards to the number of stars and planet candidates there are. Is it disappointing? Surely, but as Natalie Batalha puts it, “We’re seeing the scientific method playing out in real time.”