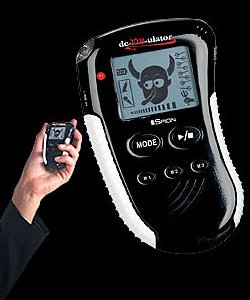 So how do you do what the title says? You just have to turn this little thing on, hold it in your hand, ask your friend the question, have them give you a real answer, and this baby will let you know if you should find new friends. This sounds like such a cool product, until the novelty wears off and you are stuck with a lie detector and negative $40. Also, you will have to move to a different state because every who knows you will now avoid you because they are afraid of the fact that you might be testing their every word. People allow a little slack sometimes. Looking past the problems of this device, it does have some practical applications. Maybe the police could make use of it to test if someone they pull over is telling the truth, but we already have other tests for stuff like drunkenness or being drugged up. Last minute note: you won’t be able to surprise anyone with the lie detector because they have to say three truths first. So much for the friend and girlfriend idea… — Nik Gomez