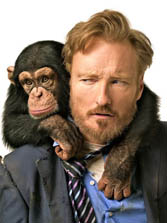 Ever since his not-so-amicable split with NBC in January, Conan O’Brien took to the internet, not only to passive-aggressively rage against the machine, but to tout his next venture, Conan on TBS, which debuts on November 8, 2010. His newest venture is slightly more ambitious than a series of tweets. Starting at 1 pm ET, Conan takes to the web with a 24-hour live webcast event, dubbed “Coco Cam.”

Coco Cam will provide a behind-the-scenes look at Team Coco HQ and even promises to feature dancing tacos. I’ll hold you to your word, Mr. O’Brien. Head over to Conan’s official YouTube channel at 1 pm ET to watch Conan live for an entire day.