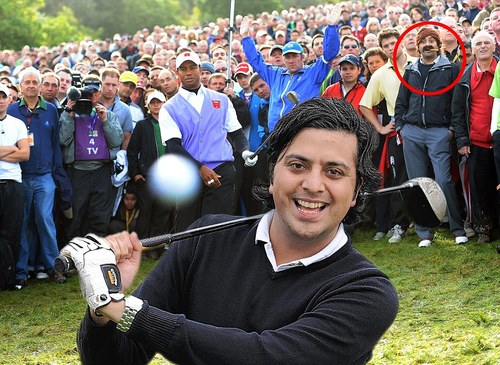 A week or so ago, an amazingly striking (no pun intended) photograph of Tiger Woods shooting a golf ball straight at a photographer went through-the-roof viral within a matter of hours. Almost just as quickly, one bug-eyed mustachioed man smoking a cigar in the very same photo overlapped the original popularity of the actual theme of the picture. This man became known as Cigar Guy.

Cigar Man’s identity has finally been revealed. Meet 30-year-old, London-based investment analyst Rupesh Shingadia. Rupesh dressed up in the fake mustache and wig (which was originally thought to be a turban) in tribute of Spanish golfer Miguel Angel Jimenez. ‘I wanted to do something to show my support for the European team and I thought of Miguel. These days sportsmen have become devoid of character. But Miguel does his own thing and I love the way he walks around the course with a cigar clamped between his teeth.’