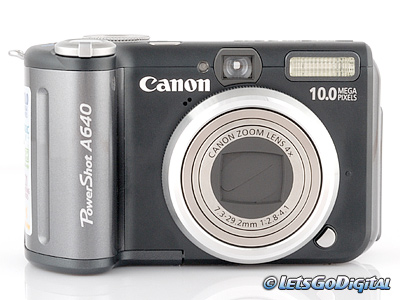 LetsGoDigital has reviewed the Canon PowerShot A640 Digital Camera. The A640 is a 10 MP camera with a 4x optical zoom and is an addition to the Canon A-Series of cameras, which is geared towards reasonable price, accessibility, and high quality mechanics. Because of these goals the A-Series has become a popular line of camera among a broad spectrum of photographers and hobbyists.

The review describes how the A640’s tilting LCD display is a “definite advantage” over other companies models with similar specs. From the previous model of the A620, the resolution has been increased from its previous number of 7 MP and the LCD screen has been increased in size. The review is a complimentary one and even calls the A640 “beautiful” at one point.

In the conclusion the LetsGoDigital reviewer writes “There are still some things that could be improved upon. Take the noise ratio at 400 ISO and higher ISO settings. They are good for a ten Megapixel camera, but not totally clean.” While high ISO levels are clearly a needed tool for many, if you are a hobbyist looking for a camera to capture some great shots on the weekend, the A640 seems like a smart choice. — Andrew Dobrow