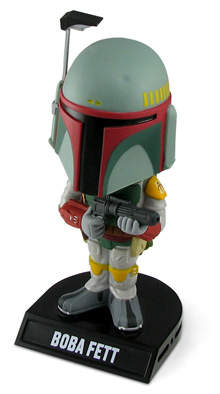 Boba Fett, one of the most mysterious and popular characters from the Star Wars series is now available in bobble head form. This bounty hunter is like we’ve never seen him, with his head three times as large as his body.

Other than the Stormtroopers and Darth himself, Boba is the baddest Star Wars villain of them all. With no compassion for human (or alien) lifeforms (much like the dreaded Bill Lumbergh bobble head), and a hazy and undefined past, Boba Fett is a nice little desk topper toy for hours of bobbling fun. — Andrew Dobrow