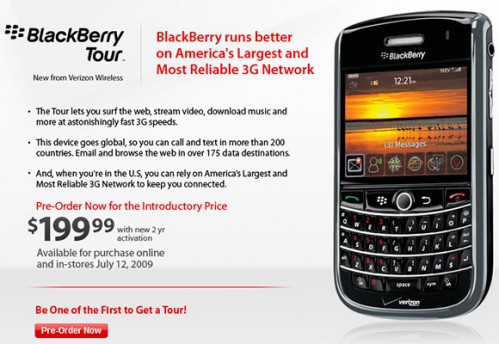 Verizon users are grinning. There’s finally a new phone in the pipes that people will actually want to buy. It’s the Blackberry Tour and it costs as much as an iPhone 3GS and drops July 12th.

What’s that magic $199 price tag net you? The Tour of course can do 3G but it also has a nice 3.2-megapixel camera with autofocus, a 480×360 display, Bluetooth and GPS. While the lack of WiFi is disappointing, it’s hardly surprising for a Verizon phone. Hell, consider yourselves lucky enough to have Bluetooth! Overall, looks like a decent phone for the business crowd.